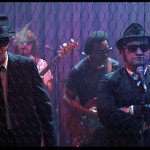 Presentation Construction and All That Jazz

I was recently in New York City, and ended up watching a performance at the Jazz Standard.  Jazz audiences always seem eclectic to me. If you go to a Country and Western gig, the audience tend to be uniform, in fact they mostly wear a uniform – involving denim, boots and fantastic belt buckles. Last year at a Springsteen concert, the common passion was tailgating and BBQ in the parking lot, indicating that music is just one of the interests they all share. Point being that as a performer, you have the right to expect an audience that chooses to come because they fit a mold, they like jazz, blues or barbeque.

Do you recall the scene from the Blues Brothers movie where they inadvertently find themselves booked into a country western club? That’s what happens when the audience come expecting one thing and get another.. they throw bottles at you.

During the jazz gig,  I thought about how much the musicians were playing for each other, as well as for the audience. In the entertainment business you can make assumptions about who they are and what they expect – but in business, assumptions are dangerous, we need to know:

Then and only then can we begin to formulate objectives and build a communication strategy.

Begin with the end in mind

Most people start late in the process, starting with “what should I say?” I encourage clients to begin with gathering information about the audience, determining objectives and a clear definition of success (e.g. win the business, persuade to your line of thinking.)

My usual analogy is with chess players. A novice gets frustrated when the Grand Master takes 15 minutes to ponder a move – but the master does not try to win the battle in that move, he is focused on winning the war with his last move.

The same goes for the Jazz concert, all the players at times seemed to be playing on their own, but then they would all stop on the same note at the same time. And the crowd absolutely loved it.